The Freedom of Making the Right Choices 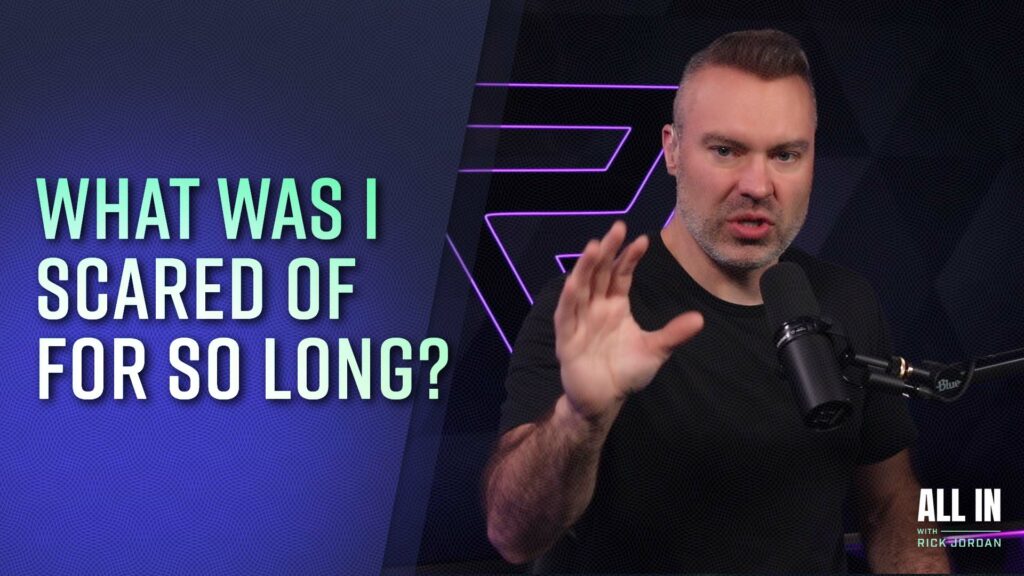 Rick Jordan speaks today that the reality of not making a choice means being detached from real life. The longer we are sitting in a limbo of not making our choices, the more we cheat ourselves on our tomorrows. Choices exist when you choose to finally have the freedom you’ve been in search of.

Listen to the podcast here:

Do me a favor on this, share this episode out with people that you know could benefit from hearing in store for today.

You want them in the same place as you, and that’s what we’re going to talk about today because we don’t grow.

The only way that we grow is when you share this out with other people. Please take a minute, three people that you like, then rate and review the show as we dive into this because we don’t have sponsorships, we do not do that kind of thing.

This is content for you and it’s free, because I love to help people.

Hopefully we can help some of you out there today get unstuck, and be able to cut this wire that has been holding you to where you can’t move forward and you feel like there’s something constantly pulling you back.

What I’ve noticed over the course of my life, is that people will come and go in seasons.

This is friends, this could be relationships, business partners, employees, and even bosses.

This is everybody, and some of those when they transition out they hurt a little bit more than others.

Usually, what I’ve heard is this phrase is, It is what it is. I don’t like that phrase at all because typically, where you’re at right now has been either created by you, or something has happened to you, or another person is keeping you there.

Those are really the three things, and I want to focus on really that last one. Because there’s this concept we need to talk about, getting unstuck and moving forward. Everyone that I know has come to some sort of crossroads in their life. Sometimes it’s very difficult to see, even for me, which path to take because you feel like things are clouded, and you feel like things are right in front of you, but you just can’t see them.

You feel like this, “Oh my God, can’t the clouds just clear so I can actually look beyond and see what’s going to happen a year from now, five years from now, if I go left or what’s going to happen 10 years from now if I go right.”Or is there a way that I can forge a new path down the middle and see what could happen just six months from now if that left or that right is not right for me in this?”

Here’s the brutal truth: You can never see beyond the choices that you haven’t made.

It’s almost impossible to fathom what everything is, there and now, it just becomes conjecture.

It becomes something you’re hoping and dreaming of can happen, but you can’t actually taste it yet or see it materialized completely, until you make the choice about where you’re at today and what direction you need to take.

In this present moment. But oh God, what happens if something bad takes place.

With this, who or what five years down the road?”

Then you fall into a state of fear, because you can’t see beyond the choice that you have yet to make. You don’t know what’s going to happen. What’s kind of sick and twisted, is this is actually the way it’s meant to be, but it doesn’t have to be sick and twisted.

The only thing that keeps us stuck in that point of whether we go left or right or forge that new path down the middle is us. Sometimes going left hurts, sometimes going right sucks.

You’re never going to know what’s beyond that point, unless you make the choice.

Let’s get to the point where you can actually make the decision you need to make, or choose the path that you need to choose.

When you get down that road, things will start to look a little bit clearer. It’s crazy, because as soon as you make a choice, you will feel like “What was I scared of for so long?” Then, it is also looking on the other side, thinking “I’m glad I didn’t take that road, because I would have been stuck forever.”

If you can imagine that road, it’s almost like past two steps, you can’t see because those heavy clouds are there. It’s time to clear the clouds. It’s time to start doing things, so that you can eliminate these things that are creating those clouds in your life. Here is a little bit of a secret, or hack, as soon as you start to make that choice. You don’t even have to take a step down either of those roads yet, but it becomes more and more clear to you which route you should take as soon as you start to say “I am choosing” and that choice has to be you.

Choices, they can suck but they can also be freeing. They can also bring the lights and the love, and the energy, and the satisfaction and the fulfillment back into your life if you just make it. After you make that definitive choice, you’ll start to see the actions that you need to take, because now you’re realizing those completely on you. You made the choice, but then after that point, the actions that you have to take become more clear.

You might know or only know what that next action is, and that’s OK.

It’s OK to not know, and this is the thing about fear. Tony Robbins said “If I’m scared, then I must.”

If I have something on my left and I feel “Oh, I don’t want that!” and this is typically how it is.

You have two things in front of you and you’re looking one way thinking, “Oh God, I don’t want that!” Then you look in the other direction and think, “That could be cool, that looks amazing if it’s actually real.But I’m a little scared that it’s not real.”

Until then, it’s just a fantasy and it’s not real life.

Send that to 8 people that need it.

A real life could also be the best thing that you’ve ever had, that you’ve kept yourself from experiencing for the past 10, 20, 30 or even 40 years. All because of choice.

Whatever you’re hurting with today, take a look to your left at door number one, and if you’re thinking, “Oh man, I really don’t want that.”

That’s OK, it is OK because you could have grown to a point beyond where you were, when that scenario first entered your life. Now it’s time to maybe go in another direction.

That’s called growth, so if you’re looking at door number one, and you think “I don’t see myself doing that for next 20 years,” But then you see yourself to the right, and think “Wow, that could be pretty amazing.”

It’s not real… maybe it’s just not real yet.

As soon as you make that choice and you step into it, that’s when it becomes real. So keep going. Sit there if you want to, because it’s OK to be in that position for a long time.

It’s OK to be in that position for a short time. However much time you feel you need to be able to be settled, but if the information and the data is right in front of you, and it’s obvious, then it just comes back to you and your choices.

Stop living in a fantasyland because a fantasyland is where choice doesn’t exist. Choice exists now, when you choose you can finally have the freedom you’ve been looking for and you can step into real life, and the amazingness, the fulfillment that you’ve always wanted.

And if you’re scared?

Good! What that probably means is that it’s right for you!

Have a good day friends.

The Freedom of Making the Right Choices

Rick Jordan is CEO & Founder of ReachOut Technology, and has become a nationally recognized voice on Cybersecurity, Business, and Entrepreneurship.