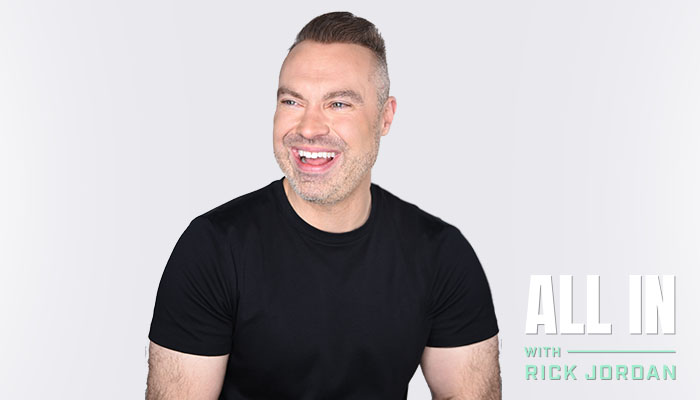 As Founder and CEO of ReachOut Technology, my mission is to protect business owners and their companies from cyber criminals and insider threats.

Over the past 20 years, I have been trained by the CIA and NSA, established the Geek Squad as the US B2B brand you know today, served as a Managing Partner & Director for the ISA, and developed advanced cybersecurity programs used by countless organizations across the nation.

My passion is education – arming people with the information necessary to protect themselves and always motivating everyone around me to aim higher.

As a nationally recognized voice on cybersecurity, business ethics, and motivation, I have had the privilege to speak at NASDAQ, Harvard, and Coca Cola, and have been frequently sought out as an expert guest on ABC, NBC, CBS, and FOX.

Listen to the podcast here:

We’re going to get rocking. July 4th, 2021 is Independence Day in the United States of America. I’m a bit of a patriot. I don’t know if you knew that about me. Of course, you did if you read this all the time. If you didn’t, just go look at my contents. I love this great country that we have. This is my first solo episode in a very long time. You’re going to get these from here on out too, which is pretty awesome, just getting some Rick’s thoughts. If you don’t follow me on Instagram, follow me @MrRickJordan because there are Rick’s thoughts that are posted all the time on there that can lift you up for the day. I try to do one a day. Usually, about five a week is what I end up with.

I was looking at this article. I was on Instagram and this got me rolling. John Cusack, the actor, was talking about this stupid stuff. They even described him as a far-left actor who has amassed an estimated $50 million net worth in his near 40-year Hollywood career and this is the irony of this. He’s like, “I was at a ballpark.” If you don’t know, baseball is a huge pastime of this country to the point where that was a way where we could all get together. The National Anthem has always been played at the beginning of a baseball game. It’s incredible. A lot of sports games are like that too. You’ve seen the controversy, especially with football with that stupid asshole Colin Kaepernick, kneeling and all that stuff, saying that it’s for racism.

Here are my straight thoughts on that. People like that are disrespecting this country. They’re forgetting because they didn’t shed blood to found this country. They’re just saying that they disagree with things and that’s cool. What else is ironic about this? John Cusack was saying, “I was at a ballpark. They did their support the troops ad, that conflate Boeing with troops serving while supporting the GOP,” meaning the Republican Party. “That means funding the insurrection, the anti-democratic forces, the opposition of what they can claim to support US freedom.” He’s like, “Had enough yet?”

What’s hilarious to me is that this dude has amassed a $50 million net worth because he lives in this country, because of what happened 200 and something years ago when this country was founded because we were trying to escape tyranny. He’s talking about all these stuff that are reasons for him. This headline was, “Actor John Cusack Trashes America: ‘We Aren’t Great. We’re Fucking Awful.'” That’s the headline of this article. That’s his opinion. This country was founded on blood. This country still maintains its freedom because of blood.

This past Memorial Day, I saw a photo of a woman who was lying on a blanket that had photos. You could tell she had it printed from a Shutterstock or something like that. She had this blanket printed with some of their photos of her, her husband and their little baby. She was lying face down on this blanket covered with photos of her and her husband. This blanket was laid out in front of her husband’s grave at a military cemetery and right next to her was the carrier with what looked like her little girl sitting in there. That’s what makes this country what it is. It is the sacrifice that people have made.

Where the fuck did John Cusack sacrifice over these years? What right does he have besides what’s given to him by our American Constitution, the United States Constitution, to even say what he’s saying? People that do this tend to forget that the reasons why these rights are in place, to begin with, why they enjoy the freedoms that they have are because of these scenarios, and the reason why we are independent. All the sacrifice and the risk that people had to take in order to get here and you look past it in all of these other years like with World War II and World War I. If the US didn’t get involved in World War II, that would probably still be going on and Hitler would have had a heyday. I don’t think you remember around that time, but the president at that time had an isolationist mentality and didn’t want to get involved in the war. There was a lot of stuff going on at that time. We were in the middle of The Great Depression.

Do you remember what got us into that war? It’s that Pearl Harbor was bombed. It killed a lot of our people, a lot of our troops and civilian casualties too from Japan. That’s what got us involved. What did we do? We send troops overseas. We send troops to say, “We’ve got this fight. Tyranny has to be stopped. People are being oppressed. Six million Jews have been slaughtered. Enough is enough.” I wish John Cusack could hear this because enough is enough. You can have your opinions but nowhere in your statements, whatsoever, do I hear solutions. All you want to do is bitch and complain. If that’s the case with you, move out of the country. This is for everybody out there. We enjoy these rights that we have, these freedoms and the ability to even amass this $50 million net worth because of our independence, because of our differences, because of the different races that exist and all of these other things.

Does systemic racism exist? Of course, it does. Is the history of this country spotless? Of course, it’s not. Have we had all the best presidents in the world? Of course, not. Why? Because we’re still human but these humans, this collective of imperfect people are the ones that said, “There’s a better way than living under tyranny and we need to be free.” People like John Cusack have forgotten about this, that the reason why they’re able to even do what they do is because of this holiday on July 4th, 2021 and because people stood up and said, “No more.” They had a solution. They didn’t just sit there and complain and be like, “We’re being taxed by King George. This is stupid. I can’t believe this is happening to me. He should go do something different. I feel like there’s nothing that I’m ever going to do, except sit on my ass, bitch and moan about everything that this guy is doing.”

These people risked their lives to make a change so that you and I can do the things that we have so that when something happens which was horrible like with George Floyd and how that happened, we can take to the streets and say that something’s got to change. That in itself is action. It’s standing up with a group of people and saying, “Let’s do something about this.” Not stand at a stupid microphone just because you think you have a right for people to hear you complain without saying, “Maybe we could do something about this,” instead of saying, “This is the worst fucking place ever.” John Cusack, come on now. He is like, “They get to wrap themselves in the flag too.” Do you know what? So do you. That’s why you can even get up and say these things in the first place. It’s because you have independence.

There are countries around the world that are run with different types of government. Not even communists, not even socialists, but monarchies or dictatorships to where if you do something like this, you get your ass killed. You’re done. You don’t even have an opportunity to try to make $50 million or that kind of net worth over a 40-year career. Your career is assigned to you by the government. You hope you gain favor with somebody so that you can do something better than somebody else and have a little bit less of a sucky life. That’s what other countries are.

Even with everything that went on in 2020. All the government made them feel about it. I took action. I did something about it. I went around and talked with officials. I interviewed people to get the message out in a way that was like, “Let’s all get together because we don’t want to be these countries like everybody else. We love the way that we were founded. The only reason that I can even make a movie like that is because of my independence.” It’s the same way that John Cusack can make a movie that he wants and amass a $50 million net worth because of his independence.

Coming back to that photo that I saw of the woman lying on the blankets in front of her husband’s grave. For every single one that has ever served in the military, I want to say, thank you for serving. This picture meant so much when I saw this. This country has been through so much and we forget these things. We forget that the reason we are the way that we are, the reason why we have what we have, and are able to even say we have an Independence Day is because of the sacrifices of everybody in the last 200 years that’s come before us.

We’re not perfect. We never will be because we are all humans but I feel that we all want the same thing. We just have different ideas on how to get it accomplished and that’s okay because that what we were founded on. It’s having these differing opinions and coming to a point where we can create something special that serves the most on the foundations of freedom and independence so we can fly that flag high. Take a look at it and remember, the reason that we can do what we do is because of everybody else that has come before this. Happy birthday, America.

Rick Jordan is CEO & Founder of ReachOut Technology, and has become a nationally recognized voice on Cybersecurity, Business, and Ethics.